IT RAINED MOST of the morning yesterday and so the bits of sight-seeing allowed a view of the Swiss countryside through a misty prism as we drove from place to place along narrow country roads. The clouds hung low over the hills, some so low that at times it appeared as if the woody hills were on fire and it was smoke rising from the trees, not wispy clouds dragging their extremities beneath and behind them.

Our first stop was a stained glass museum and workshop, the Musee Suisse du Vitrail, in the town of Romont that surrounds an old fort, or castle, on top of a hill. The museum is in the old fortress, which has been nicely restored, its thick stone walls and sturdy wooden beams acting as

a quiet backdrops for the art work. While it had a number of ancient windows, the highlight was a collection of windows by the British architectural artist Brian Clarke, who has installed his work around the world. His windows are a mixture of the old with the new, combining bold geometrical shapes of alternating colors with free-flowing shapes that give the windows a sense of movement.

But there were other windows that simply incorporated photographs. One featured Paul McCartney and, displayed on an elevated enclosed walkway connecting two exhibition areas, was a series of windows featuring men in brief swimsuits. Alls, b 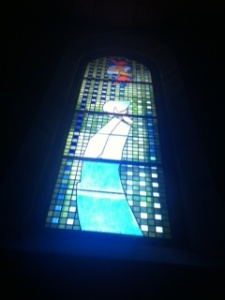 The next stop was the Abbaye de la Fille-Dieu, not far from Lamont. We got to the church just as the nuns, in their white habits and black veils, were finishing one of their daily prayer sessions, and the ritual at the end where, as the other nuns sang a chant, one of them walked to the middle of the church where a rope hung from above, falling through a hole in the roof. She pulled on the road with a couple of strong tugs and suddenly the bell in the tower gave out a loud clang, then another. Then, instead of just continuing to pull on that rope in one steady rhythm, she began to alternate the rhythm, much like a percussionist, and the bell responding accordingly. It was music, not only for the ears, but for the heart and the soul. Then, suddenly she stopped pulling on the rope and the other nuns stopped singing, and the abbey became a vault of silence as, one, by one, they all walked out, leaving Isabelle and me standing there, gaping in awe.

We recovered soon enough and began to gape anew, this time at the windows, all done by Clarke during a recent renovation. The windows were very similar to the ones in the museum, but the sense of movement, of the spirit rising, is much more pronounced in each.

I took some pictures, which didn’t come close to capturing the glory and magnificence of the sacred art of those windows.

When we walked outside we were greeted by a Siamese cat in its white furry vestment and black head, looking very much like a nun on four feet.