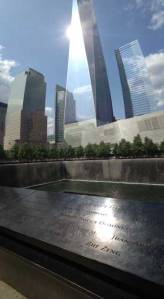 I HAD NOT planned to visit the 9/11 Memorial during my recent visit to New York. However, the sight of gleaming single tower of the new World Trade Center was inescapable; just about anywhere I went in the city I could see it rising above its neighbors. I’ve always been a fan of architecture, particularly modern architecture, and the lure of the tower became just too much to resist, so I decided I needed to get a closer look.
I spent quite a while looking at and photographing the building from every possible angle. Before I knew it, I was at the base of one of the two destroyed towers that have been converted into powerful, solemn and beautiful memorials to the victims of that heinous attack.
At first all I could see was the black granite and the falling water, and I appreciated the beauty and simplicity of the design. As I got closer, I began to make out the names of the dead on the granite.
I was probably naïve, but I was not prepared for the emotional impact it would have on me. I had started walking around the edge of the memorial, running my hand over the engraved names, the thousands of names, and I was barely halfway along the first wall when the tears started flowing and my body began to shake.
I wanted to walk away; I wanted to be as far away as possible from that wall, but I just could not tear my hand away from the wall. And so I walked all the way around the first memorial, running my blackened fingers over as many names as possible, as if by touching a name I could bring the person back to life. I then moved to the second one where I did the same thing.
What I felt was a terrible sadness, combined with despair and anger, the kind of anger that rarely enters my heart. Images of a smirking Osama Bin Laden and his bearded cohorts kept running through my mind until I forced myself to banish them by recalling scenes of the attack on Bin Laden’s compound, from the movie Zero Dark Thirty.
IT WAS ON the final wall that I saw the name. I don’t remember the name, but I do know that it was Italian and that it reminded me of the word miserere in the pleas, Miserere Nobis (have mercy on us) and Dona Nobis Pacem (grant us peace) from the Agnus Dei in the Latin Mass of my childhood. And it reminded me of the haunting music of Beethoven’s Missa Solemnis.
And the tears returned. Only this time the tears flowed not just for the more than 2,700 people who died on 9/11, and the thousands who have died in Iraq and Afghanistan. They flowed also for the millions upon millions of inhabitants of this world, who — like the millions and millions before them – cannot or won’t grasp the futility of beseeching their unhearing God or Gods for mercy and peace.