I HAVE A nephew who is a deputy sheriff in South Texas and a grandnephew who is a state parks police officer. They wear a badge. They carry a gun. They stop people on lonely back roads at all hours of the day and night, never knowing what awaits them as they approach the drivers.

Not a day goes by that I don’t think of my sister and my niece, about how much they must stay awake thinking of their sons.

The horrible and cowardly Dallas shooting that resulted in the death of five officers only makes it more difficult. 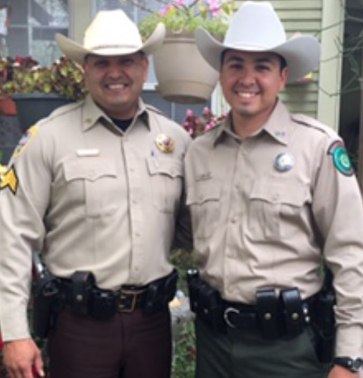 At the same time, that tragedy strengthens my respect for these two men in my family and forces me to ponder about the great mystery: what is that drives them – like hundreds of thousands of other good law-abiding, law-enforcing peace officers – to do what they do?

To see either of them stride proudly into a room in his crisp uniform with a badge on his chest fills me with awe and admiration.

I know that these two men, these two officers of the peace, are good-hearted people with a love for their jobs and a respect for those they serve and protect. I know this because I know them and because I know their parents and I know that their parents have instilled in them a deep understanding that all humans deserve to be treated with respect and decency, regardless of their status in life – and regardless of what side of the law they are on.

That much I know.

WHAT I DON’T know, and what concerns me, is whether their bosses have made it their mission to instill in their men and women the same respect for all humans, and a respect for the law as it is applies to all people.

I hope they have, but I don’t know.

We hear a lot these days about “the talk” that African American parents need to have with their young sons about how best to keep themselves from becoming the latest young black soul to have his life erased by a crazed cop.

What we don’t hear about ­– and what we desperately need – is the talk that someone – a police chief, a sheriff, a constable, a city manager, a mayor – should have with every police officer in every governmental entity in this country, on a regular basis.

About human rights and civil rights and the Constitution, and about how every person deserves to be treated with dignity and decency.

About how respect is a two-way thing.

About the fact that a badge does not bestow upon them unbridled authority but, rather, represents the responsibility that the people, through their government, have placed on them to enforce the law – not become the law.

JUDGING BY THE almost daily dose of videos showing unspeakable acts of violence at the hands of officers, it is obvious that this talk is not taking place in enough jurisdictions. And because it isn’t, the deaths and the insane retaliatory actions continue. We owe it to ourselves – and to these men and women in uniform – to demand that this talk takes place, every day and in every jurisdiction across the country.

1 Response to ‘The Talk’