Adios to a Complete Liberal

On February 4, 1994, I published this column in The Houston Post under the headline, “’Complete’ liberal gives Clinton piece of his mind.” I’m sharing it with you for two reasons. You’ll figure them out when you read it:

NOT EVERYBODY is lucky enough to have a daughter with access to the president of the United States. Carlos Uzeta of El Paso is and he is not above taking advantage of that access.

Uzeta, an engineer, is the father of local attorney Blanca O’Leary, a Democratic Party activist and fund-raiser who was one of the Houstonians at the $l,000-a-ticket reception for President Clinton last week. [O’Leary now lives in Colorado.]

When O’Leary — who credits her father’s activism for her enthusiasm for politics — told him she was going to see the president, he asked her to deliver a le 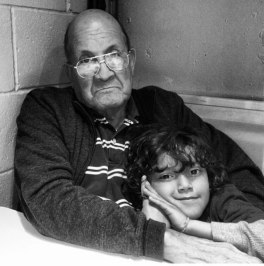 Carlos Uzeta with a grandchild (Photo by Amanda Enayati)

tter to Clinton on a subject that means a lot to her dad: immigration.

O’Leary agreed to do so. Whether or not Bill Clinton read any part of it doesn’t matter to the 63-year-old Uzeta.

What’s important is that he finally got something off his chest what had been gnawing at him for a long time.

Uzeta’s letter is a toned-down version of his original angry (O’Leary made him moderate it) but his indignation still shines through.

“It’s a completely, totally liberal view,” Uzeta explained in a phone interview. “But damn it, that’s what I am.”

In his letter, Uzeta says that as a lifelong El Paso resident, he knows what the problems are there, unlike the politicians, “who are far removed from the battlefronts and bear a tinge of either racism or indifference towards the local populace, just so long as it makes them look good in the polls.”

He was particularly critical of El Paso Border Patrol chief Silvestre Reyes, who decided to set up a blockade along the Rio Grande to keep Mexicans from illegally crossing the border.

“Now Mr, Reyes is proudly proposing to erect a metal barrier along the border,” he wrote. “I assume the federal government will fund this little pet project for Mr. Reyes with little concern for the negative impact it will have on our neighbors to the south with whom we just signed a trade agreement. It would be one of the most disgusting, degrading, insulting, and abusive actions ever taken by our country should such a ‘tortilla curtain’ materialize.”

Uzeta wrote Clinton that the alleged negative impact of immigration has become an easy issue for politicians desperate for causes.

“The Republicans have begun to ensure that immigration becomes a make-or-break stance for its candidates,” he said. “I fear that in order to counter the attack, many Democratic candidates will unwittingly succumb to the threat and join in the hysteria.”

Recalling the anti-Japanese campaigns during World War II and other anti-immigrant drives throughout the country’s history, Uzeta asked:

“Who is ignorant enough to deny that, because of public pressure, such tactics cannot be repeated and applied to me or my family who either are or ’look’ Mexican? Arrests for ‘looking’ Mexican have long been the trademark for the Border Patrol along the border regions. From there it is only a short step to property dispossession. Mr. President, ethnic cleansing is alive and well in America.”

Uzeta asked the president to, among other things, consider a conference with Mexico to explore solutions to the immigration issue, and to support funding for a comprehensive study to develop accurate statistics on the economic impact of immigrants.

That last one has got to be the most sensible proposal regarding immigration I’ve heard coming from anyone. Today we are forced to rely on studies that are, for the most part, conducted by researchers who skew the statistics to confirm their views. We don’t have an independent, unbiased way of looking at whether immigration is good or bad for this country and its economy — something we desperately need if we’re ever going to deal with the problem seriously.

But, as Uzeta explains, politicians would rather deal with cheap vote-getting remedies than with the causes of and serious solutions to the problem.

“It’s too complicated for them,” he says.

UZETA IS concerned his outspokenness might embarrass his children, especially O’Leary, but he says he’s simply fed up with the anti-immigrant talk.

“The good Lord has given me good health, and as long as I’ve got that, my tongue won’t stop wagging,” he said. For that we should all be grateful.

Long may it wag.

That tongue stopped wagging a couple of weeks ago after Uzeta suffered a massive stroke. He died Thursday night in his beloved El Paso. I got to visit with him only a few times, but each time I came away thoroughly satisfied that I had spent time with a wise and kind man who had an excellent sense of humor and who loved his family deeply. I consider myself mighty fortunate that I can count a number of his survivors as good friends. I grieve with them. Adios, amigo.

1 Response to Adios to a Complete Liberal